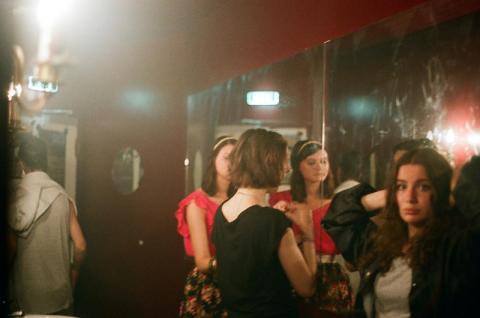 God, I wanted her. And she knew it, even then. I’d just taken her picture, you see; I was commissioned by the student paper. I was doing all of the nightclubs, and I can tell you now, it was a fucking chore. Being sober as a judge and watching everyone else drink away their night, becoming drunk as pigs. You would have hated it. Anyway, this particular night I was in Kaos. A real dive. They even scattered sawdust across the floor of the dancefloor in this place, and the stench that came out of the men’s toilet was indescribable. I paint quite the picture, don’t I?

So it’s all the more surprising that in the midst of this shithole, I found love. Yeah, it’s corny, I know. I’m almost ashamed to say it myself. You always said I was incapable of it, didn’t you? Well it finally happened, and all because of my camera lens. It was early on in the night, so drunken incidents were mercifully few, and I’d spotted this group of girls messing about in front of the huge mirror that comprises one wall downstairs. I readied myself to take the shot, but the girl closest to me threw her arms up behind her head and pouted like a model. I knew immediately it was unusable as a photo – my editor had expressly said he wanted candid shots – but I was smiling as I took the camera away from my face.

I wasn’t expecting her to come bounding up to me. She half-skipped across, a smile breaking out on her face where her pout had been moments before. It was an electric smile, a real heartbreaker. “Can I have a look?” she asked. As she said this, she reached up and touched my arm as she turned to stand next to me to look down at the camera screen. It was a throwaway gesture, I know, but that touch will stay with me forever. It was brief, over in a flash, but lingered with me for the rest of the night. So, I showed her the picture. She looked down at it for a moment and I watched her frown. She said, “Hmm, it’s not my best.”

So I tried to be all gentlemanly, didn’t I? It’s what I do best, right? Don’t laugh, it is! I assured her that it was a great picture, she looked like a model, yadda yadda yadda. I thought I was pulling the whole thing off, but she just stood looking at me dig myself deeper into this giant hole. She had her arms crossed over her chest the whole time, this smile spreading over her face, and one eyebrow raised. She giggled at me once I’d paused mid-flow in my stream of bullshit and told me I was cute. I thought she was hot even before this exchange, if that’s what you could call it, but now I was falling for her. God, I wanted her then, let me tell you. Then she said something that I didn’t catch – I was too busy drinking in all the details, but I did hear her call me Clark Kent. Which was funny. I did have my glasses on, after all. And I was taking pictures.

I mumbled something with a stupid smile on my face, but again I can’t remember if it was witty or moronic. Whatever it was, she had seemingly had enough, because she said she had to get back to her friends. I’d forgotten all about them. I glanced over to the mirror and saw them watching all this unfold, smirks on their faces. One of them gave me a little wink. When I’d turned back to say something to the girl, she had already headed back to her friends. Well that’s that, then, I thought. I tried to slink away all cool and casual, but some fat bastard chose that exact moment to walk into me with his pint. He spilt pretty much half of it down my sleeve. I heard one of the girls tittering away behind me, and I wanted to punch this stupid guy in the face, I was so angry.

I didn’t. I kept some composure. I checked the camera to make sure it hadn’t got wet and retired to the men’s room. The bogs weren’t blocked and there was no puke on the floor yet. Thank god for small mercies eh? I wiped down my sleeve with some paper towels. It was completely soaked. I did my best to repair what damage I could and headed back outside. I hadn’t got many pictures yet and I really needed to crack on if I was going to be able to produce any decent shots for the editor in the morning. But, despite knowing this, I headed to the bar at the back – which is the quietest – and propped myself against it at the furthest end. I switched on the playback feature on the camera to steal another glance at the picture. It actually didn’t do her justice, you know. She looked much prettier in motion, so to speak. But still, I looked at that photo and sighed at another missed opportunity. The ‘gentleman’ had struck out again.

But then I hear this playful, “Hi Clark” at my shoulder, and she’s right there. I was embarrassed, as you can imagine, and fumbled for the power switch to get the fucking photo off my screen. It was too late, of course, she had seen me staring at it. This was awful. Just awful.

“Checking me out were you?” she asks me. Again the playful tone. I felt my face go as red as beets, and I mumbled some shit about just checking through the shots I had already. She nodded sarcastically.

“How about I buy you a drink, Clark?” she says, and then she adds, “I’m Lois.” It was the first time I had laughed all night. The rest, as the saying goes, is history.

You are currently browsing entries tagged with A Real Heartbreaker at Worth 1000 words.